Following nationwide attention on unfairness in exam results, Teach First has laid bare the stark inequality which already existed in England long before this year’s controversy.

The analysis also highlights the ongoing differences across the country. In Inner London, 59% of disadvantaged pupils achieved a pass grade in GCSE English and maths, but in eight of the ten other regions that figure drops to less than half - between 40% (South West) and 44% (West Midlands).

There is evidence that the attainment gap has widened slightly in five of the ten regions in England in the last few years, raising further concerns about the futures of thousands of young people, including in the North West, Outer London, South East, South West, and Yorkshire and the Humber.

Research by the EEF has warned that any progress made in closing the attainment gap in the last 10 years could be wiped out as a result of school closures caused by the Covid-19 pandemic.*

As a result, Teach First is calling for an increase in long-term funding for schools with the most disadvantaged intakes. The charity says that great teachers make a decisive difference in tackling the attainment gap. To get them to the schools where they are needed most, Teach First are also calling for financial incentives for early career teachers who work in schools facing the greatest challenges.

“Young people, parents and teachers have been overwhelmed by the confusion and change with this year’s exam results and the process threw a sharp light on the inequality in our education system.

“We hope that after this week’s change many young people are finding a resolution and are on a path to fulfilling their potential.

"However, inequality in exam results is hardly unique to this year. This report has laid bare that due to unequal access to a brilliant education, pupils from wealthier homes are awarded better results than their peers year after year. It’s not because they are smarter or more ambitious, there are talented young people in every community. To tackle this once and for all we must prioritise investment in schools in low-income areas to build a fairer, thriving society.”

“It's hugely concerning that across England, disadvantaged children face worse futures because they're not able to achieve their full potential at school. The progress that’s been made in closing the gap in London is cast iron evidence that your life doesn’t have to be determined by your background, because it’s much less determined by your background in the capital than it is elsewhere. We need to see the gap closed altogether in every corner of our country.

“Now thanks to Covid-19, pupils have lost 10% of their time in secondary school - and we know that many of them weren't getting a good education through that period. So we should be shouting from the rooftops about this and taking urgent action.”

*The Department for Education define a “Standard Pass” as Grade 4 and above, which is the metric Teach First used for this analysis.

The full dataset for the national and regional GCSE English and maths pass rates for 2017-2019 can be found below. 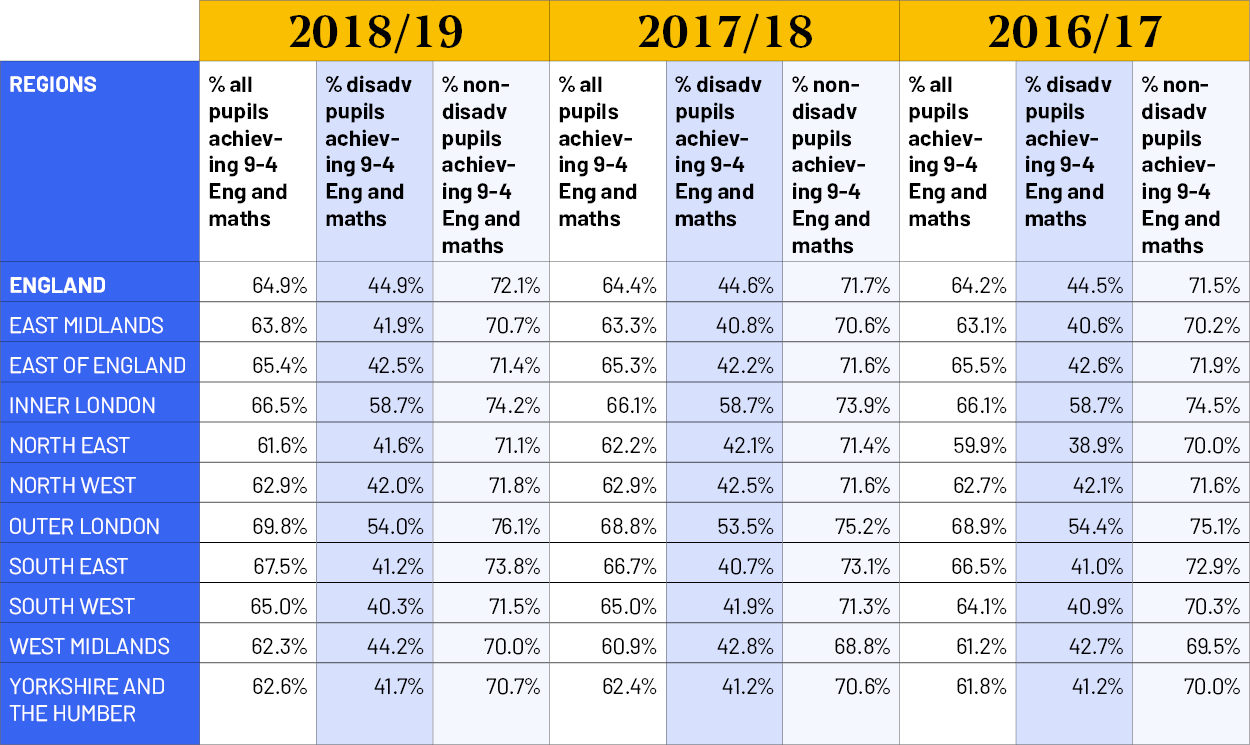 Teach First is an education charity with a mission to build a fair education for all. Through a range of school leadership programmes the charity supports teachers, leaders and schools facing the biggest challenges, serving the most disadvantaged communities.

The charity has now recruited over 14,000 teachers and leaders, has over 60 head teachers in their alumni and has supported over a million pupils.

Those on the Training Programme commit to a minimum of two years at their partner school, where they teach a Newly Qualified Teacher (NQT) timetable; and around half stay on for a third year. More than half of all the teachers who’ve completed training since 2003 are currently teaching.