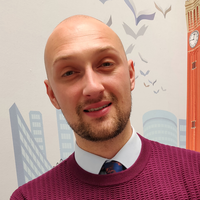 Nathan is not shy about being himself at school. The ambassador shares how LGBT+ visibility brings empathy to education, teaching queer youth they are worthy.

Every child needs a positive and authentic role model, wouldn’t you agree? That someone in whom they see elements of their deeper selves, which may not be visible in their home or local environments. So, don’t LGBT+ kids need to have a role model too?

I have been teaching in my Teach First training school for five years now, having moved from the free spirited life of Madrid to a metropolis of multiculturalism in Britain, Birmingham. The heartlands of revolution – the Industrial Revolution – but also social revolutions. Tensions between progressive and conservative social stances, as exemplified by the No Outsiders controversy, initially had the power to force me back inside the closet in the work place to accommodate a community which ‘wasn’t ready’ for an out teacher.

That was five years ago, and a lot can change. Multiculturalism (not only ethnic and religious diversity, but also diversity in sexuality and identity) creates a unique, and continually evolving level of tolerance, followed by acceptance. For me, this can only be a positive: cultural acceptance can change in the space of five years if you are unapologetically authentic about making change for the better.

Being a six-foot-four northerner whose English lessons analyse the persuasive language techniques used in Whitney Houston and Mariah Carey lyrics, it would be a miracle if I wasn’t noticed as someone a little different. Let’s face it – that giant, shaved-headed man who wears massive shoes (in the mind of a year eight), not to mention in fabulously colour coordinated attire, and passionately reading you the lines ‘there can be miracles if you believe’ would leave you feeling a little overwhelmed and questioning: 'who is he?'

To make classes exciting, a teacher must make themselves visible. We enter this profession to increase the life chances of the young people we educate, but also to have a positive impact on their lives, and to be a beacon of safety in their lives. It is a fact that rates of self-harm and suicide in young LGBT+ people in the UK is higher than that of their straight cisgender peers. Why? Bullying and rejection; a sense of being alone; the feeling of ‘not being normal’ or going against expectations, to name but a few. Yet, for those students to have a visible queer teacher standing in front of them shares strength, pride and passion for education.

Of course, challenges have occurred in the classroom regarding my identity: from the occasional snide remark, to curious questions designed to throw me off topic. It has become clear to me that an out teacher should always remember that students are children, and children (and adults) make mistakes – they need to be educated and intellectually embraced with honesty, warmth and dignity. Embrace conversation. How can we expect young people to be authentic about themselves if the adults they are surrounded by cannot be honest about themselves?

As a Teach First trainee, I knew how important it was to have colleagues who cared about my authentic self, and Teach First as an organisation led with impeccable support in my training years, and after. This year, through Teach First, I was introduced to LGBTEd, an organisation which believes in supporting visible LGBT+ teachers and leaders in the classroom. This year, I was invited to go on a course with them, which empowered me with the knowledge and contacts to help support queer people in all parts of a school community.

This course gave me the LGBT+ understanding that I never received at school – and that understanding is valid for every young person and staff member in the UK education system to move society forward. We live in an era of misunderstanding, where many people have, as described in in the Equality Act of 2010, ‘protected characteristics’.

Being visible is being recognised: being recognised is being seen by people you represent. We, as educators, work in a powerful profession. Your integral self-worth should never be questioned, as we instil this value into our young people: they are worthy. The queer community has always been here, in the past targeted and marginalised, but now we know better - history and great education has taught us better. To all LGBT+ teachers and allies: stand strong and visible with Pride.

Now, back to Whitney: "I believe the children are future, teach them well and let them lead the way…"