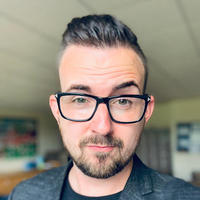 Daniel Tomlinson-Gray reflects on his new book Big Gay Adventures in Education. He shares how he got writing, and admiration for LGBT+ teachers as role models.

In 2017, after nine years in teaching, I came out to my students and colleagues during an assembly kicking off LGBT+ History Month. There were no jazz hands, drama, nor hysteria. I started with just four seemingly small, but actually very big words: “As a gay man”, and went on to say “I know how important it is to have positive role models”.

My story gained worldwide news coverage. I saw an outpouring of support from my former pupils, people across the UK and all over the world. I even received a postcard from someone in Texas sharing how my story had moved them to tears.

I wanted to use this newfound profile to make a difference for young people, and set up LGBTed with my friend and co-Founder Hannah Jepson. Our aim was to create a positive and empowering network to support LGBT+ Teachers to be ‘out’, and “be the role models we needed when we were at school”.

The idea for the book came from my experiences following the founding of LGBTed. I realised that before LGBTed, I only really knew my own story. I met so many amazing, brave and inspirational people with positive stories to tell. There is so little data and research out there on the experiences of LGBT+ teachers in school, so you have to rely on and trust people's stories. These weren't being heard. We wanted to change that.

And so I sent a tweet in mid-2019, which led to another outpouring of support. This time with the aim of generating interest in contributing to an ‘unspecified new project’. People signed up before I even told them what my idea was! So 18 months, two lockdowns, 24 stories and a fair few sleepless nights of editing later, the book Big Gay Adventures in Education was born.

Along with the full story of my assembly, there’s 23 other wonderful stories including:

To be out or not to be out from ‘legendary lesbian’ Sue Sanders. Sue shares her experiences of navigating the education system since the 70’s, and her campaigning against the damaging Section 28 legislation, which prohibited schools from teaching pupils acceptance of LGBT+ people and families.

In It’s Ok from David Lowbridge-Ellis, he shares a transcript of his assembly in what turns out to be a very personal and empowering talk delivered to support LGBT+ young people in his school.

And in Miss I’m part of LGBT too, Amy Ridler shares the story of how having an out teacher at school helped her later in life. This was, she writes, not only to process her own identity, but to go full circle when she was able to have a positive impact on a pupil when she became a teacher herself.

We’re so proud of all 24 stories from many different walks of life, and all with some “Big Gay Notes” from me at the end of each chapter to summarise the key takeaways.

We had a brilliant launch event for the book, where six of the contributors shared a bit more about their stories, with questions and answers from the audience. Over 100 joined us from across the UK, Europe and the USA. It was so amazing to see people connecting via the chat and on Twitter. We were even joined by a Year 9 pupil who joined to find out how they might be able to help support LGBT+ Inclusion at their school! #hero.

Join the LGBTedUK cohort of the Education Management Programme

Following the launch, we are excited to announce our latest project: a new partnership with the National College of Education on a new, fully-funded, LGBTedUK cohort of their Education Management Programme. The programme is aimed at LGBT+ Middle Leaders and allies and will be a comprehensive framework for leading outstanding teaching and learning in schools. If you’re interested, be sure to register as soon as possible!

"LGBT+ History Month is a time to celebrate and take action"

It’s brilliant to see the support and action going on this LGBT+ History month, and it’s important to me that we celebrate and take action to shine a light on the incredible people that paved the way for us. In the midst of your own struggles, it’s easy to forget that others struggled before you - you can learn from their experiences. It’s also a time to read, listen and understand. A time where we can ask questions, get answers, and draw attention to the different levels of privilege and the complexity of the barriers faced at different intersections of identities.

Every year, it's a time to get together and focus on one sole aim: to break those barriers and be the positive LGBT+ role models we needed in school.

Daniel Tomlinson-Gray is co-founder and director of LGBTed. His book Big Gay Adventures in Education is currently available in most major online bookstores.

Register your interest in the LGBTedUK cohort of the National College of Education’s Education Management Programme. The course is due to start in July 2021, so be sure to sign up by 31 May. When registering, select ‘Partners – LGBTed’.