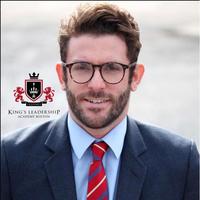 Headship can be lonely - but not with Teach First’s networks

When David landed his first headship role, he was overwhelmed. Thanks to the support and resources of the Heads Forward network, he's learning to thrive.

February 15 2019 was one of the strangest days of my life. The date was significant: being both my first headship interview and the beginning of my stag-do weekend. The interview was for the headship of a new Free School, situated within the Trust I’d been working in for the past five years. The interview was incredibly rigorous featuring a variety of tasks, culminating in a 90-minute interview in front of a panel of 15 people - including senior figures from the trust and the DfE.

It was a role I’d wanted for some time: the chance to set up a school from scratch was a once in a life-time opportunity. However, due to my perceived lack of experience compared to other candidates, I approached the day thinking I wouldn’t be successful (but at the very least, it would be good experience for future applications).

After the interview, a few good friends picked me up and drove me down to Leamington Spa, the venue for the weekend’s festivities. Around 7pm, as we approached our hotel, my phone started buzzing with a call from my Trust’s CEO, Sir Iain Hall. I picked up and to my surprise he informed me that I’d been successful - I was now the Principal Designate of King’s Leadership Academy Bolton, an 11-16 Free School which would be opening in just six months.

As you might imagine, I didn’t really have time to process this information or consider the size of the task ahead of me until after the weekend - which was also the start of February half-term.

During that week the much-discussed ‘Imposter Syndrome’ went into overdrive. “They must have made a mistake”. “How was I going to open a school?”. There was a lot I was aware that I didn’t know, as well as an even greater amount that I had no idea I needed to know.

Thankfully, I soon got a call from my good friend Leonie, who’d done Teach First in Merseyside with me and was now working for them. She told me about Heads Forward: the network for ambassadors now in headship roles. Within a matter of hours I was invited to join the fabled WhatsApp group and a Heads Forward event.

One thing people often say about headship is that it’s a lonely position to hold. With few people to really talk to, even my friends in education seemed to look at me differently. However, Heads Forward provided me with the community and network that I missed having from my previous positions. I now had access to a group of people who understood what I was going through and could offer insight into the challenges I was facing on a daily basis.

The diversity of schools represented in Heads Forward is one of its main strengths, including:

However, it is abundantly clear that we all share the same aim: to address educational inequality and give all students, from all backgrounds, the same high-quality of education and chances in life.

Within Heads Forward there’s a wealth of experience and a willingness to share ideas and resources, which has directly benefitted both myself and my school. Never was this more the case than over the past 12 months during the pandemic. It was through the group, especially the aforementioned WhatsApp group, where (even before the first lockdown) huge amounts of guidance and resources were being shared on almost an hourly basis. It became a safe space, where people felt confident to ask questions without judgement and receive open and honest answers.

Another key strength of the network is that, although we have the same overall aim similar to Teach First’s mission, there is a real diversity of thought about how we go about achieving this. Instead of becoming dogmatic and claiming that there is only one way schools should be run, there is a spirit of collaboration. We know that although we might have different philosophies on how schools should be led we can still learn a huge amount of each other.

For example, at King’s Leadership Academy Bolton, our mission is for all children to become successful citizens. We seek to do this through both a strong knowledge-based academic curriculum and character and leadership education. We have borrowed strongly from the private sector in terms of our enriched curriculum, as well as a strong focus on behaviour and routines. Our philosophy can best be represented by two quotes: “Excellence is a habit” (Aristotle) and “human greatness does not lie in wealth or power, but in character and goodness” (Anne Frank).

I am fully aware that this is not the only way a successful school can be run. The support I have received from Heads Forward has never been judgemental and I have benefited greatly from the chance to learn from as well as visit so many of the amazing schools in a variety of contexts.

Since I joined the Training Programme in 2009, I have gained so much from being in the Teach First community. I have made great friendships and met excellent colleagues because of it. Even now, three members of our Senior Leadership Team and a further two of the Extended Leadership Team were trained through Teach First.

The Heads Forward network has allowed me to collaborate and learn from some amazing leaders up and down the country. This has undoubtedly helped me become a better leader and therefore help provide a better work environment for my staff and quality of education for the children in our care. As we come out of the pandemic and the network grows, I look forward to visiting and learning from as many schools as possible.

Join now
Back to top