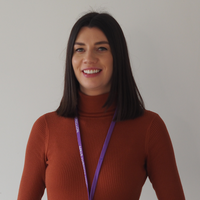 How I’m using science lessons to build my pupils’ confidence

Science trainee, Lizzie Pocklington, shares how she's getting her students inspired to study the subject beyond GSCE-level, breaking down barriers to learning.

After studying biomedical science at Sheffield Hallam University, I worked with a grant funder for NHS scientific research. I eventually decided to do some tutoring for GSCE and A-level students. It was then I realised that, though I loved my job and found it interesting, I also really love working with young people. It was so much more rewarding.

Soon I thought about going into teaching, and that’s when I came across Teach First. What interested me most was their philosophy of wanting to help children from disadvantaged backgrounds; even though I don’t come from a particularly disadvantaged upbringing myself, I still went to a school that was failing in many areas.

I wasn’t privately educated. I shared some of the difficulties that some of my students have had. For example, a lot of them have had supply teachers in science for the last one or two years, because it’s hard to recruit for that subject. When I was in school, I didn’t have consistent teachers across some subjects - but especially science.

I can relate to the students who don’t feel confident to put their hands up, or don’t feel that they’re making much progress because they constantly feel a bit behind. It’s a challenge. But it's a challenge that I enjoy, because it’s so rewarding to see children starting to believe in the subject, and in themselves again.

Now I'm taking part in the Teach First Training Programme, teaching science at a school in Nottingham. I try and encourage kids to study science beyond GCSE. I can relate to their reservations: even though I studied biomedical sciences at university myself, I wasn’t aware of all the different jobs available within the scientific industry. That’s one thing that I try and get across to the students that I teach: just the sheer amount of jobs in science out there.

Very few of my students had even heard of biomedical science as a subject. Everyone knows doctors and nurses – you see them all the time, they’re on the front line – but what you don’t see are the biomedical scientists doing the tests that those doctors ordered. That’s all behind the scenes.

Not long after joining my school, I started an after-school science revision club. I could tell there was a gap in the students’ knowledge, and I really wanted to help them get up to speed in time for their GCSEs.

Originally it was just for Year 11, but a lot of my Year 10s and Year 9s are really motivated to do well in science, so I opened it up to Key Stage 4.

I’ve seen a lot of progress, both in the work and attitude from having the after-school club. Because it’s more informal (I don’t mind a bit of chatter - I bring chocolates), the positivity extends to my science classes. Now, more students come from classes that I’ve never taught before. About 30% of pupils in the club are kids that I teach, and 70% are kids that I don’t.

Strong leadership from my school mentor and headteacher

When I thought of the idea of the after school club, I first ran it by my school mentor. He also teaches science and understands all the intricacies of teaching the subject. He has helped me massively and is someone I can always go to with any questions I have, such as when I don’t understand part of the curriculum, or haven’t done a certain practical before.

Recently I had a practical, and I asked him: “I haven’t done it before, how do you do it? There’s so much to think about. I have thirty-two kids to manage.” And he really broke it down for me, step-by-step. It’s really invaluable that I can just go to him at any point.

Our headteacher is also Teach First trained, and he’s got massive aspirations for the kids. He’s so dedicated and passionate in getting this school and the kids on the right track. He’s really trying to change the culture of the place, which I’ve noticed even working here over the past six months. Even though what we do is really challenging, strong leadership has definitely impacted on the way that we’re teaching and helping kids value education.

Getting children to believe in themselves

Notoriously, science is seen as one of the harder subjects. Culturally, people think that you have to be really clever to study it because it’s really hard – and that puts up a barrier in front of children. They might not believe they’re capable. You can almost visibly see that barrier in some kids when they come into the classroom.

But once you break that down and show them that they can do it, they start believing in themselves. As soon as you start building that confidence, it just grows and grows.

Do you also want to build confidence in young people and help them reach their full potential? Learn to teach on our Training Programme.

Or if you’re looking for new teachers like Lizzie to join your school, find out more about recruiting teachers with us.