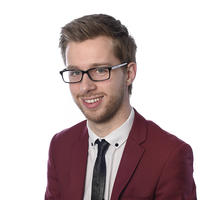 Robert Fisher went into teaching because of the subject he loved.

As an A-level maths teacher he’s grown equally passionate about something else: widening access to post-16 education, and raising the aspirations of children who often don’t realise quite how far they can go.

I’d always wanted to teach. As a Year 4 kid I wanted to be a primary teacher, then later that became geography. Then I found out I really loved A-level maths, so it was that subject I finally landed on for my teaching career.

I wanted to go straight into the classroom, not have to do a year of studying first, so chose Teach First. It was only once I started teaching – after about week 3 – that I really understood the Teach First mission, when I realised that young people from disadvantaged backgrounds need more than just maths.

I was teaching in Burnley, which at the time had no direct trains into Manchester. That might sound like a small thing, but it had a big effect on the opportunities available to them and their parents – and therefore a big effect on aspirations. Staff retention in the school and the area was also very low, meaning the kids weren’t as far along as they should’ve been.

Inspiring children to reach their potential

In 2014 I joined a sixth form in Blackpool, because I wanted to teach A-level, as that’s where I’d fallen in love with maths. After a year I became the Oxbridge coordinator, and started helping pupils with their applications: including personal statements, interview prep and entrance exams.

That year we set a new school record for successful Oxbridge applications – seven. Kids in independent schools will often be getting private tuition to prepare them for their Oxbridge exam, so it’s nice to be able to level the playing field a bit. One of my pupils, who started at Oxford in 2018, actually nominated me for the university’s ‘Inspirational Teacher of the Year Award’, which I won!

This year, myself and an ambassador who's just finished the programme set up a network called BEACH – Blackpool Educators Active Community Hub. It’s all about giving active support to new local trainees who, because of COVID-19, have done all their training online. They’re going through the same challenges but they don’t know how everybody else is doing.

That’s why, when I was approached about setting it up, it was like ‘YES! We need to do this.’ In just a short time we’ve gone from two people to six of us, meeting online each month to offer support – the trainees lead the conversation themselves. It means I can have an impact on many more young people, well beyond the gates of my school.

Through that I also get to build connections with the local high schools. The next step will be bringing their pupils into our sixth form, to chat with them and help them believe they can come here. Like the Oxbridge applications, it’s about raising aspirations, because a lot of them don’t think they’re good enough.

I’ll admit, when I left my first school and joined my sixth form, I did wonder if I was taking the easy route. But Blackpool is one of the most deprived places in the country, so in terms of helping young people get to university, I’m in one of the best places to make a difference.

Like Robert, if you've completed any of our programmes, that makes you a Teach First ambassador. You are now part of a community changing education for the better. Our community consists of teachers, leaders, policymakers and beyond, bringing their expertise to help unlock the potential in all children. No matter where you've chosen to go after your time with Teach First, as an ambassador, you're a critical part of the solution to ending educational inequality.

Find out more about how you can stay connected and continue to make an impact, below:

If you're interested in developing your career with us, explore our leadership programmes: